If you're expecting hard science data here, you won't get it. But you'll get my impressions as a regular end user who got their first PC back when they called them clones. In 1990. And SOME measurements and tips.

I got one because it was under $490 once they gave me a $50 coupon because I complained about the McAfee and onsite warranty I didn't want.

So, fair enough since for $10 I'll take the warranty.

And I plan to sell the keyboard and mouse new in the box for hopefully $20 or so total at least.

Fans were pretty loud but those temps IMHO aren't horrible.

CPU sustained speed of 4090mhz during the 3DMArk torture test.

Cinebench R23 just reported a 7683 score with an ending temp of 83C. And my room's kinda warm. Wasn't running exclusively tho. Peak power at 59W, so that makes sense. TDP is 65W so it isn't reaching it's full potential.

Single core Cinebench shows the core only running at about 4.15ghz max according to HWMonitor.

Cinebench R23 after replacing the 80mm case fan AND while mining ETH on the GPU: 7754 so only a 1% diff. Maybe worth a few percent.

Multicore test is only showing the CPU running at 3.85ghz. Package temp is 93C so it may be throttling even tho that's below the 100C max.

Mine didn't come with the nice plexiglass window. Oh well.

First tip: get rid of that hard drive cage that blocks a bunch of the holes in the front of the case. I have only the 500GB NVME and a 2.5" SSD. That's free extra cooling. Even if you didn't order with a hard drive, the cage is there.

Second Tip: Use something to clone the NVME and then wipe it. I have a Windows 10 Pro drive I converted to UEFI bootable so it's booted from that and later I'll clone it over to the NVME. Right now it's in a 2.5" bay.

Power supply: I think it's 360 watts? This is plenty for the GPU/CPU usages of max 120watts+65watts. So you've got half (`180W) left for other stuff. Plus, there's a video I saw that the power supply is underrated and will actually put out more before shutdown. Unless you want a monster video card, it's enough.

There are two 2.5" sleds in the case for mounting 2.5" devices. Power is prerouted so all you need is a long SATA cable. There are 4 SATA ports.

The i5 CPU is clock locked, so I don't think it's worth it to replace the CPU cooler.

The 1660Ti isn't a beast, so I don't think it has much of a cooling problem either.

In the BASE system, with no hard drives (NVME/SSD only) I think maybe a case fan in the front after removing the hard drive bracket will be sufficient.

I had an old Kingwin 3 pin fan around but it was either a 120 or 140mm. It wedges just right between the case edge at the back and the silver housings the port are in. So it's not even secured. It's not tight enough to damage anything but it isn't going to slide out either as it doesn't vibrate. Pretty slow fan but way better than the 80mm stock fan that was back there that I couldn't even feel when it was spinning. It was 'free' from the pile o' crap(™) in my office.

If you have a 3 pin fan lying around, the guide key is there on the motherboard for one. Just disconnect the 4 pin 80mm in the back. You just get max RPM all the time...which is probably a good thing in this case. Pun intended. 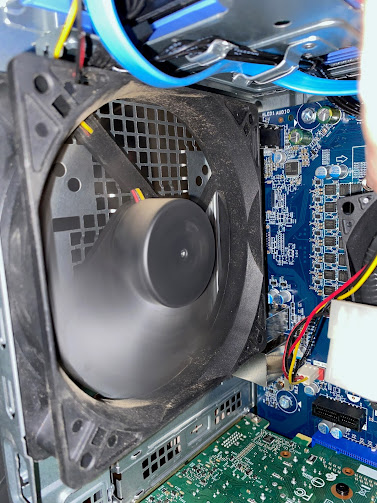 This tiny fan, besides GPU fan, is all that moves air thru the case. Yeah,  move it to the front and put it on a PWM splitter. That'll bump cooling a bit more and they are literally about $3 on Amazon.
Using this link (https://amzn.to/3jH8AUI) to open my search results on Amazon and pick one you like.
Buying using my link earns me a few cents.
I wouldn't put more than 3 on a splitter personally, and not put the CPU on the same one as a case fan.
Look at the stock case fan. Does it look like it's big enough for the case? It's not shrouded nor does it spin very fast. When I held my hand next to it, I could not really feel much airflow. 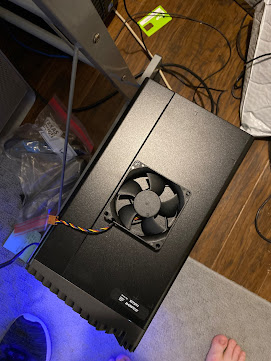 There are two SATA power cables where the 2.5" card cage is so you can drive older fans like this one, which would probably help the GPU and overall air movement in the case even more.

The GPU doesn't have RAM/VRM heat sinks. Nor do the VRMs on the motherboard.
You can actually find the motherboard VRM heatsink on Amazon but I dunno if it's worth the $22. https://amzn.to/3jIeWU6 Hit that link, right? :)
Here's the SATA power adapter if you want to use a fan with a Molex connector:
Email Post
Labels: dell dellg5 minireview

Install HiveOS on a USB Drive Using Mac OS X: The commands are wrong on Hive OS' site for Mac OS. And some other important tips.